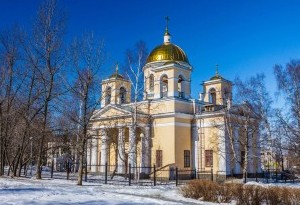 On the territory of Karelia Alexander Nevsky was always revered by the people. The construction of the cathedral was begun with the consent of Alexander I, who donated 30 thousand rubles for the construction. However, it would have been impossible to build the planned temple if the townspeople had not taken the initiative. Most of the expenses were covered by the merchants and workers of the enterprises.

In the XVIII-XIX centuries in Karelia, they only began to engage in wooden architecture, so the task to build a stone cathedral seemed impracticable, and there was no one to do it. After the appearance of the funds, the solution was still found: the government representatives invited a foreign expert from Italy, Pietro Maderni. He and several local residents led the construction of the temple, which is made in the style of classicism and has five domes.

From the beginning of the Soviet government until 1991, the Alexander Nevsky Church in Petrozavodsk was used for the needs of the local history museum, it was during this period that the bell tower was dismantled. As soon as the building returned to its former hands, restoration work began immediately, which was completed only in 1999. Ebbing the bells for the temple was done in Voronezh, and in Sofrino, the masters created an iconostasis, covered with gold leaf.

At the beginning of the XXI century, the Patriarch of Moscow and All Russia Alexy II came to the cathedral to consecrate the Alexander Nevsky Cathedral in Petrozavodsk, and presented a gift - an icon of the Mother of God.