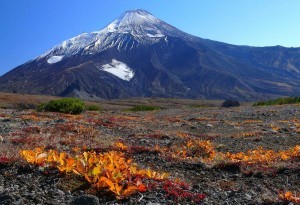 The Avachinsky volcano, also known as the Avachinskaya Sopka, is more often called in its own way - Avacha, confusing some foreigners (“everything in Kamchatka is called Avacha!”). Of the trinity of "home volcanoes", located about twenty km from Petropavlovsk, Avachinsky is the homeliest. Not a wrinkled patriarch, like Koryaksky, not a ruin, like Kozelsky, but a smooth neat cone, above which white columns of steam almost always rise like smoke from a chimney.

Despite the solid height (2741 meters), it is so easy to climb the Avacha Hill, that in the summer it is conquered by all and sundry. In the mass ascents sometimes involved up to a thousand people. The ascent begins from the bed of the Dry River, where tourists are thrown on cross-country vehicles and all-terrain vehicles. The ascent takes one day and is divided into three stages - up to the levels of 1200, 1500, 1700 and 2000 m. At the two-kilometer mark, as a rule, there is a screening. The fact is that the Kamchatka climate has one extremely unpleasant feature: the air on the peninsula is quite rarefied, and the “miner”, a mountain sickness, begins at a much lower height than in other mountains. The last seven hundred meters of steep ascent to Avacha are much harder than the previous two thousand. Especially difficult for smokers.

Those who do not retreat are awaited on the top by a view of the Sredinny Ridge, a toy Petropavlovsk with the Avacha Bay puppet and a volcanic caldera, comparable in beauty to the Vesuvius caldera. Enjoy the spectacle is fully hampered except that fumaroles, which emit stinking clubs of volcanic gases. An extra reminder that the cozy home Avacha is an active volcano. He erupted, by the way, relatively recently, in 1991.

At the foot of the Avachinsky volcano, at the source of the Dry River, there are two tourist bases. In the summer, small, curious gophers resort to the bases. As professional beggars, they literally besiege tourists in the hope of getting something edible. Having gnawed on food, the gophers begin to work for the camera: they don’t rush to escape, slowly and picturefully chew - in general, they pose.

IMPORTANT
If summer ascents do not require special preparation, then in winter, you have to literally conquer the hill. To climb the winter Avachinsky volcano is necessary in the group under the guidance of a competent instructor, and each such group must be registered in the Ministry of Emergency Situations. This measure is not a formality, it saved dozens of lives. Climbing training, the ability to use an ice ax and walk on cats are required.

HISTORY
Avachinsky volcano is not much younger than Koryak, and in its height it once even surpassed its neighbor. Approximately 11,000 years ago, Paleo-Avacha collapsed, forming a caldera - a volcano basin. The cone (those same 700 meters of steep rise) began to grow about 5,000 years ago and continues to this day.

The first ascent of Avacha was attempted in 1787 by the French from the round-the-world expedition of the famous traveler La Perouse. In Soviet times, was born the tradition of mass climbing the fells. Probably the most spectacular of such ascents was the march of the participants of the Osoaviakhim's gatherings on July 26, 1937: they went up to the volcano's mouth with a system, in full display, with a weapon.

In 1952, science fiction writer Arkady Strugatsky, who served in the army in Kamchatka, rose to Avacha. Later, the Strugatsky brothers described the Avachinsky volcano (under the pseudonym Adairsky Sopka) and the ascent to it in the novel “From the Outside”: “This is exactly what I thought was the entrance to hell. Below us there was a gaping abyss with a depth of several dozen, or maybe a hundred meters. The walls of the abyss and its flat bottom were gray-yellow in color and seemed so hopelessly dry, so far from any hint of life that I immediately wanted to drink. Honestly, here physically felt the complete absence of at least a water molecule. From the invisible cracks and cracks in the walls and in the bottom jets of smelly sulfur fumes rose. They filled the crater per minute and clouded its opposite edge”.