Home About Russian Travel News Cathedral of the Annunciation, Moscow

Cathedral of the Annunciation, Moscow 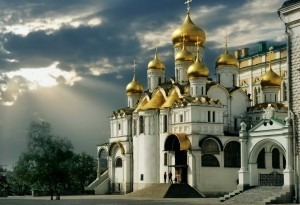 The nine-domed Cathedral of the Annunciation of the Moscow Kremlin is famous for its cozy, chamber, but luxurious interior with frescoes of the XVI century, the colorful jasper floor of the same time and the famous iconostasis with icons of Theophanes the Greek and Andrei Rublev. The cathedral is one of the most outlandish and complex Kremlin monuments, it is very interesting with it. A few years ago, we could add “one of the most mysterious”, but recent studies have significantly clarified its ancient and extremely complex biography.

To begin with, the Cathedral of the Annunciation is the Moscow Prince’s own house church, and its first owner, apparently, was Dmitry Donskoy. The Kremlin has preserved two buildings, dating from the XIV century - the basement under the cathedral and the Church of the Nativity of the Virgin, now located in a closed area. The church is precisely dated to 1393, and the basement seems to be even older, because the quality of its laying is noticeably rougher, archaic. If so, these walls can also remember Tokhtamyshevo devastation of 1382, the second of the two most terrible dates in the ancient history of Moscow, when its population was almost completely exterminated. For the first time the Tatars massacred Moscow in 1238, and the memory of that disaster also lives under the arches of the Annunciation basement - now the princely treasures hidden on the day of the capture of the city of Batu and found in the 1980s are on display.

In 1405, the Cathedral of the Annunciation was painted with the participation of Andrei Rublev himself. These paintings were burned in the fire of 1416, but nevertheless in the iconostasis of the cathedral there are several icons attributed to Rublev (brought here later from another church). After the fire, the Cathedral of the Annunciation was thoroughly rebuilt (from this period only the white-stone base of the apses with one window survived), and then again - in 1489. At this time, Italian architects were already working in the Kremlin, but the authorship of the new Cathedral of the Annunciation was listed to the artel of craftsmen from Pskov. They erected a three-domed church, from the east to which the two-story building of the prince's treasury adjoined (previously, the basement of the cathedral served as a treasury). The state chamber was dismantled in the 18th century, but with a recent restoration, traces of its adjoining were revealed on the eastern side of the cathedral: the outlines of the roof, the steps and steps of the stairs leading to the attic, and a part of the wall niche where something very interesting was probably kept can be seen.

The church was surrounded by high porches, preserved to our days, and this is one of its most amusing details. As mentioned above, the cathedral was built for one family, and the porch as a room for the poor and the repentant was optional for him. So these porches are part of the main entrance to the palace of the Grand Duke, with which the cathedral was connected by an arched passage. It was along this staircase that the ambassadors of the Christian powers entered the palace, and it was not by chance that at the beginning of the 16th century, the northern and western doors of the cathedral were decorated with carved portals in the style of the Italian Renaissance, and the walls of the porch were decorated with frescoes with portraits of ancient Greek thinkers.

The next time the cathedral was rebuilt by Ivan the Terrible in 1564. The main volume became five-domed, four small chapels appeared at the corners of the porch, and the so-called Grozny porch was added from the south. According to legend, the king built it to observe the service from the side, being excommunicated for polygamy. In fact, this is not the case. The porch is part of the transition from the palace to the treasury and at the same time the main staircase of the State-owned Chamber - although it looked at the inner yard fenced off from Cathedral Square, it was used for solemn removal of especially valuable relics stored together with the treasury in order to avoid the danger of fire and the “thieves coming”. Also, the porch is remarkable as the only surviving example of the palace architecture of the Grozny time, very rich and unusual, with fine stone carvings, red walls and black arches of passages.

In the XIX century, when the new palace stood on the site of a new one, higher and “more brutal” than the former, the cathedral on its background began to look even more subtle, complex and outlandish. Today we can see in it both the most ancient Moscow relic, and the only part of the Sovereign Palace available for free internal viewing, and evidence that the Kremlin in the 16th century was the residence of the highest European level.

IMPORTANT
The ensemble of monumental painting of the cathedral of the Time of Ivan the Terrible and the ancient iconostasis are of tremendous value. Many researchers believe that the icons of the Deesis rank belong to the brush of the illustrious Theophanes the Greek, and some of the icons of the festive series belong to the greatest medieval painter Andrei Rublev.

LOCAL FEATURES
Climb the bell tower of Ivan the Great - you will not regret! From there you can see not only the Kremlin ensemble, but also the entire old center of Moscow.

The Blagoveshchensky Museum is part of the Moscow Kremlin Historical and Cultural Museum-Reserve. A visit to the cathedral is included in the price of a single entrance ticket to the territory of the architectural ensemble of the Cathedral Square.

Photo and video filming inside all the cathedral museums is prohibited, but directly on the territory of the Kremlin you can take pictures with an amateur camera (that is, a simple soap box).