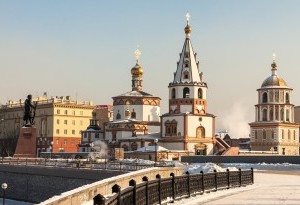 The Epiphany Cathedral in Irkutsk is one of the oldest buildings in the city and one of its main attractions. The cathedral was founded in 1693. Originally, it was a wooden church, but after the fire in 1716, the cathedral burned down in Irkutsk. After some time, local authorities decided to restore the temple, but from a brick.

In April 1804, in Irkutsk, there was a strong earthquake, which damaged the cross of the cathedral and the fifth dome. In the autumn of 1812, a place was already prepared for the bell tower of the temple. A bell weighing 12 tons was poured in 1797. In March 1815, it was raised to a new bell tower, made in the style of Russian classicism. However, in 1861 another earthquake occurred in the city, which severely damaged the cathedral: the columns were moved, the bell tower, arches and vaults were significantly damaged. In 1894, the cathedral received the status of a cathedral.

During the Soviet regime, the temple was closed, and then used as a workshop of a bread factory. In 1968, restoration and renovation works began in the building of the cathedral. The bell tower has acquired its original appearance. After reconstruction, the cathedral building was transferred to the Local Lore Museum. In 1994, the Epiphany Cathedral of the Lord was returned to Orthodox believers. Six years later (in 2002), the painting of the altar of the temple ended, and a year later - the painting of the facade.

Today, the Epiphany Cathedral is an active church, which is one of the main religious attractions of the city of Irkutsk.