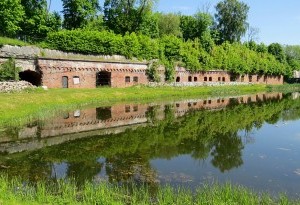 Fort No. 5 is a powerful defensive structure, surrounded by a moat, a stone wall and an earthen rampart. Built at the end of the 19th century, it stood the main test in 1945. More precisely, couldn't handle, but at this wall, the defenders of Konigsberg for each German killed were put ten Red Army men - at such a price the Soviet 43rd Army paid for taking the fort "King Frederick William III".

Today the fort looks idyllic. The defensive ditch, covered with light rippling water, reflects a peaceful blue sky, brick walls and caponiers are protected only by a bored cashier. Only imagination will help to represent how under heavy fire through the gaps in the walls fighters broke through here.

But on Victory Day, the territory in front of the fortifications is given to reenactors, and the war returns. Thank God, toy, with pyrotechnic explosions, without blood and destruction. Inside, the “fascists” take up their positions again, and the “Red Army men” storm a ditch under a hail of bullets. The peace museum exposition seems to dissolve, and the military fortress comes to life. The fort was born for war, lived for war and died in the war.

HISTORY
The fort "King Frederick William III" was built at the end of the XIX century as part of the Konigsberg defensive ring. The fortification of bricks and concrete with a twenty-meter moat, mortars, artillery and a garrison of three hundred soldiers covered the road to Pillau. The neighboring fortifications of the defensive ring were located at a distance of three kilometers from each other, and the space between them was superbly swept.

The Soviet 43rd Army, which was advancing on Konigsberg, fired a fort with special weapons for three days, but the three-meter walls were hardly damaged by heavy fire.

The assault began only after the sappers, under cover of darkness, crossed the moat and blew up the fort's caponier. The battle lasted all night from April 7th to April 8th. The next morning the German garrison capitulated. For the siege and capture of Fort No. 5, fifteen Soviet soldiers were awarded the title Hero of the Soviet Union.

In 1979, the fort became a branch of the Kaliningrad Regional Museum of History and Art. In 2001, the Kaliningrad non-state museum of fortification and military equipment was established at its base. Currently, part of the defensive structure is open to the public, thematic expositions are working in the barracks and canteens. Outside there are an exhibition of weapons and a memorial in honor of the fallen on the fronts of the Great Patriotic War.