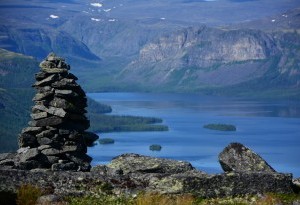 Among the one hundred thousand lakes of the Kola Peninsula, the Seydozero is not distinguished by either size or depth — seven kilometers by two, clearly not a competitor to either Imandra or Umbozer. But the fame of the most mysterious reservoir of the Kola Peninsula has long been firmly established behind Seydozero.

Seydozero is located in the center of Lovozero tundra, in a mountain bowl. The main road to it runs through the lowland between the mountains Ninchurt and Kuamdespahk - they are called “the gateway to Seydozero”. There is also a “back door” - from Revda, across the Elmorajok Pass, along the cleanest river of the same name.

The Saami revered the lake as sacred, which is reflected in the name: “Seyd” means “saint” in Saami. When the Saami came to Seydozero to fish, they necessarily sacrificed part of the booty and tried to talk in a whisper. Restless esotericists have been searching for the sources of this holiness for more than a century, sending an expedition to the lake after the expedition and probing the bottom with ultrasonic locators. As a result of these surveys, traces of ancient buildings and a stone observatory (another mini Stonehenge) were discovered, as well as something like runes of meter height, carved on coastal rocks. True, experts say that the “runes” are actually geologic probes, but apologists for secret knowledge do not give up. They declared Seydozero a “place of power” and insist that the mythical Hyperborea was located here.

The mystical halo is supported by countless stories about how in the broad daylight on Seydozero entire tour groups disappeared without a trace, how experienced people lost their way and wandered into the impassable jungle. I must say, tourists in these places really periodically disappear. But, as a rule, they are quickly found, and the causes of such incidents are prosaic: they did not calculate the forces, did not take into account the peculiarities of the weather. In Lovozero it is very whimsical, and around the sacred lake it is completely unpredictable, so that the sun may shine on one side, and on the other, an impenetrable snowstorm will rage.

These quirks of the Seydozero microclimate are also often written off as “special energetics”. They say to see the mysterious lake in all its glory, you need to ask about it. If you ask well, you will see both the mountain slopes and valleys covered with high spruce, and the huge silhouette of the Kuyvo giant on one of the cliffs - a giant petroglyph that has, oddly enough, a natural origin. But the stunning landscapes are “shown” by no means to everyone. If you believe the stories of travelers, some are suddenly attacked by such anxiety that it is not at all up to the landscapes; other lake meets impenetrable fog and a fierce snowstorm. They say that this is how Seydozero accepted the extravagant ophthalmologist and “specialist in ancient civilizations” Ernst Muldashev. He must have asked badly.

IMPORTANT
Neighborhoods of Seydozero - the territory of the state reserve Seydyavvr. It is forbidden to be here without the knowledge of the administration and outside specially designated routes, to cut wood, to make fires outside the campfires, to hunt. Fishing (of course, on the the fishing rod) is allowed.

Join our tours and take a look at this amazing attraction:
www.uvisitrussia.com/day-tours/tours-to-murmansk/