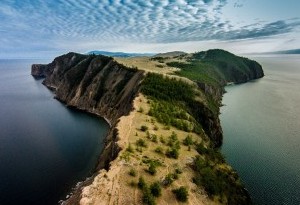 Olkhon is the only Baikal island where people live constantly. In addition to local residents, ancient spirits constantly live here and periodically - tourists.

Olkhon is the territory of a myth, an ancient fairy tale. Here the first Buryat shaman was granted the ability to speak with spirits; here shamans fled from the lamas in the era of Genghis Khan. Here on Cape Burkhan there lives a stone dragon and stands a sacred Shaman-rock, revered by both shamans and Buddhists. On Burkhan dwells, if tourists have not yet expelled it, Ugute-noyon - the master of Olkhon, the most revered deity on Baikal.

Olkhon - the territory of the Pribaikalsky National Park. In the west, the island is shallow, with sandy shores, in the east - severe, mountainous. The steppe in the south and north turns into a pine forest, birch and larch, thyme and wild rosemary. There are mountains and even deserts on Olkhon. The latter can be considered both exotic joy and a considerable problem. Deserts block the road to the picturesque Cape Khoboy on the northern tip of the island. Owners of jeeps, however, these sands are forced without significant problems. There are no rivers on Olkhon, but there is the salty Shara-Nur lake, Nuku-Nur lake teeming with living creatures, the warm and fish Khankhoy lake.

The locals, like their distant ancestors, fish, cultivate vegetable gardens, and breed cattle. Traditionally - but not always legally - they cut wood. They walk in the winter on ice to the “big land”. Leaving their island, they say goodbye to Baikal, on arrival they go to greet. This is the Trans-Baikal custom.

Olkhon has too many legends. It is too beautiful and too accessible - on the ferry in summer and on the ice road in winter. It attracts more and more tourists. For them, camp sites and hotels are being built, for them - bicycle rental and internet, night fishing, boat trips, horseback excursions, photo safari and creative meetings with shamans. Even the small museum of local lore in Khuzhir, founded by Soviet teacher Nikolai Revyakin in 1953, turned into an object of tourist attraction.

Olkhonians catch fish for visitors, prepare poses (manti), lead tours along the coast. Tourists pay for such attention in cash and mountains of rotting garbage. Neither the spirits nor the shamans can remove the dirt from the island, just as they cannot return to Olkhon the sacred solar eagle, the balaban falcon, the sable, and the funny seals that do not burn on the rocks. Today, the only true defenders of the island are environmental volunteers...

Olkhon is the largest island of Baikal and the third largest “lake” island in the world: its area is about 730 square meters. km Olkhon is located in the middle part of Lake Baikal, near the western coast of the lake. About 1,500 people live on the island permanently, 1,200 of them in the largest settlement of Olkhon, the village of Khuzhir.

Olkhon is separated from the mainland by the so-called Small Sea - the Baikal zone with a special microclimate, and the Strait of Olkhon Gate, which has the reputation of the most treacherous place on Baikal.

The history of Olkhon is rooted in ancient times. An ancient human site of the Paleolithic era was found in the Saray Bay, its age exceeds 13 thousand years. Over 200 years of exploring the island, archaeologists and local historians have discovered more than 150 archaeological sites - rock paintings, ancient settlements, sites, burials, religious and fortifications. Many of them have not survived to the present day (as often happens, the uniqueness of the island began to be realized relatively recently).

You can learn more about the history of the island and see some of the artifacts found in the Museum of Local Lore in Khuzhir.