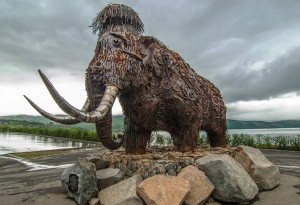 Lead waves, the steel color of the sky and the mammoth, which stands on the shore of the bay, as a symbol of eternity and frailty of all life before the onslaught of time. The sculpture, by the way, is called “Time”. Strangely enough, even though this embodiment of the Ice Age is made of scrap metal, it looks very organic at the water’s edge.

The sculpture is as majestic as the element, and as mysterious as the ocean. The tusks of a metallic mammoth glisten in the rays of the sun, its sides resemble some kind of complex clock mechanism. His wool is transformed into countless rings, gears, screws and spheres of copper color. The height of the animal is four meters, the length is six, these are real proportions. A live mammoth would look the same. The giant weighs six tons.

The local sculptor Yuri Rudenko became the author of this guard of the Nagaev Bay. Four years have passed since the birth of the idea and its implementation. Scrap metal was collected throughout the city. In the course went everything: chains, mechanisms, parts of old cars. All that was found, carefully sorted and then welded in parts. Mammoth grew by leaps and bounds. And the welding work took only three months, the rest of the time was spent on collecting six tons of scrap metal.

When the giant took his place, everyone gasped. In such an unexpected way, Rudenko decided to perpetuate the image of the imperial mammoth, who actually lived on this territory during the Ice Age. In part, the sketches were based on the features of Dima's mammoth, which archaeologists have found. Surprise for the Magadans was also the fact that the mammoth "spoke." Inside the sculpture there are special strings that, with strong gusts of wind, make sounds similar to the roar of the beast. The imperial mammoth echoes the elements.

This monument to the mammoth came as it should, by the way, in this very place. He became the guardian of the sea gate. His mechanical skin covered sea salt and in the rays of the setting sun it seems that the beast comes to life. He really “lives” - on numerous souvenir magnets and in interesting selfies. And surrounded by happy kids, the metal giant is very similar to the character of the famous cartoon. A square was broken near the monument, which became a favorite vacation spot for the residents of Magadan.

Join our tours and take a look at this amazing attraction:
www.uvisitrussia.com/tours-to-siberia-and-far-east/