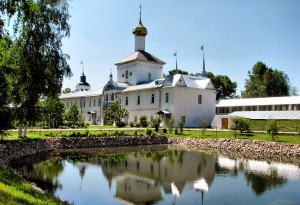 The Tolgsky monastery was founded by the Rostov Bishop Prokhor at the beginning of the XIV century at the place where the icon of the Most Holy Mother of God appeared to him. It is thanks to the miracles of healing at the Tolg icon in the XVII-XIX centuries, the monastery became one of the most famous and visited monasteries in the province.

One of the main buildings of the monastic ensemble is the five-domed Vvedensky Cathedral (the Cathedral of the Presentation of the Most Holy Theotokos into the Temple), erected at the end of the 17th century on the site of a cathedral built in the times of Ivan the Terrible. The interiors of the temple were painted in 1690, but only small fragments remained from that mural.

The oldest Holy Cross Church (Church of the Exaltation of the Holy Cross of the Lord) with a refectory was built in the 1670s on the foundation of the church of 1625. Since 2003, the main shrine of the monastery is located here - the wonderworking Tolga icon.

At the hospital ward, whose walls are decorated with carved baroque details, in the early years of the 18th century, the Savior Church was erected. This temple was built in the spirit of Moscow Baroque: the complex octahedral dome of the church consists of eight miniature domes, located around the high round dome.

The Yaroslavl Governor-General A.P. Melgunov, the hero of the Patriotic War of 1812, as well as the participant of the Battle of Borodino lieutenant-general N.A. Tuchkov were buried in the Church of the Savior.

On the territory of the monastery complex there are several chapels preserved - monuments of the pseudo-Russian style. A brick cubic chapel, erected in place of the mass grave of 46 monks and servants of the monastery, killed by the Poles during the defeat of the temple in 1609.

The hipped chapel of Alexander Nevsky was erected in 1889-1892. The Chapel of the Icon of the Mother of God stands on the spot where, according to legend, at the beginning of the 15th century, the Tolg icon was found after a fire. By the way, now there is no river named Tolga on the map of Yaroslavl. But according to historical sources, the icon of the Mother of God was found just near the mouth of this river, therefore the icon was called the Tolga, and the Tolgsky Monastery was founded at the place of its acquisition.

Since the XVI century, the monastery has the oldest monument of national landscape gardening art - cedar garden. True, tourists are not allowed there, fearing for the safety of cedars.

LOCAL FEATURES
Time for inspection
If you just want to see the monastery, you will have a couple of hours, and if you plan to take part in the service, then from one hour to several.

The monastery can be accessed from Monday to Friday from 9 to 21 hours, and on weekends from 10 to 20 hours.

Events and holidays
Tolgin Day - a solemn holiday of the Tolga cloister is celebrated in the monastery on August 8.

HISTORY
Legends
In 1314, the Rostov Bishop Prokhor, circling the diocese, stopped for the night on the banks of the Volga near the mouth of the Tolga River. At midnight, he woke up from the bright light and saw a glow on the opposite bank of the Volga. Across the river, an unknown bridge stretched toward it. Crossing the bridge, the bishop discovered that the radiance emanates from the image of the Mother of God who was in the branches of the tree. The next day, Prokhor and his companions founded a temple in this place in honor of this icon.

According to legend, when many years later the monastery burned down, the miraculous icon was again found by monks on a tree. There was no damage on it.

According to one of the legends, in 1553 Ivan the Terrible himself was healed from a leg disease in the Tolgsky Monastery. As a token of gratitude, the king invested heavily in the construction of the stone Cathedral of Vvedensky.