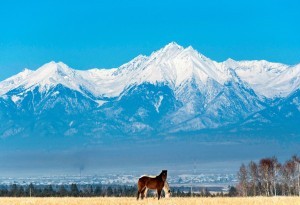 The entire territory of the Tunkinsky district of Buryatia, where the valley is located, occupies the eponymous national park. This is one of the most beautiful places: mountain ranges, picturesque green meadows, near which run swift rivers rich in rare species of fish. Most of the reserve is covered with dense forests. Tunkinsky Park is famous for its thermal and mineral springs. One of the main natural attractions of the park is the peak Munku-Sardyk, the highest point of Buryatia (3,491 meters).

Another attraction of this place is the famous Tunkinskie Goltsy in the south of the valley. The ridge, whose height reaches 3,300 meters, is often called the Tunkinsky Alps. Its highest point is the peak of Strelnikov (3284 meters), named after the lieutenant, who died in 1969 on Damansky Island. At the foot of the Tunkinsky Holtz, the Hobokskoe Lake is located with crystal clear water. On the southern side are the thermal springs of the resort "Arshan" - the most visited natural pools in Buryatia. It is worth a stroll along the banks of the K?ngargi River (“shaman’s tambourine” in Buryat), originating from a mountain gorge. Most sources are located here.

Literally a few hundred meters away, there is a section of the K?ngargi channel, which is called the Marble bottom due to bright yellow, brilliant rocks glistening through the water flow. Downstream you can admire the First Waterfall, whose height reaches 6 meters. Directly above him, from one bank to another, a shaky bridge is thrown - entertainment for extreme lovers.

There are waterfalls Second and Far, and in all at Kengarg 11 waterfalls. Right behind the sanatorium, the path leading to the peak of Love, located at an altitude of 2144 meters, takes its origin. It is believed that his visit gives couples long and lasting relationships and heals people suffering from infertility. The ascent usually takes from three to six hours, the bold and hardy reward will be a magnificent view of the rocks and the Goltsev ridges. Near the road leading to Arshan one can observe small cone-shaped hills. These are extinct volcanoes of the Ice Age, their age is 10-15 thousand years.

Seven kilometers from the resort, near the village of Ulyabory, is the long-extinct volcano Khara-Baldock. Its height reaches 120 meters, and the diameter of the crater is 90.

The main monument of volcanic activity in the Tunkinsky National Park is the legendary Valley of Volcanoes in the lava-filled lowland of the Hi-Gol River, which partially flows under a thick layer of frozen lava. There are several cones of hills, the largest of which are Kropotkin and Peretolchin volcanoes.

In the village of Khoytogol there is a historical-ethnographic museum dedicated to the life and culture of the Buryat people. Here are collected household items, dishes, coins, jewelry and costumes of the indigenous people of the valley. The building, in which the exposition is located, is an eight-wall yurt - a traditional Buryat dwelling. In the village of Zhemchug, the Museum of Buddhism History, which has no analogues in Russia, works.

The oldest Buddhist temple of the Tunkinskaya valley - datsan Tushita - is located in the village of Kyren.

Near the village of Shimki there is a sculptural composition by Tamkhi Baryash (“bring tobacco”), which is a large smoking pipe. According to legend, the great Buryat warrior Shargai-Noyon, descending from heaven for a battle with the Mongols, rested in this place and lit his pipe. Locals believe that the image of the hero is captured in the nearby Mount Baitog, which in its outlines resembles a lying man. It is believed that if you sit at this place and then leave some gift for Shargai-Noyon, then the spirit of the warrior will grant you good luck.

Another place associated with the name of the character of the Buryat epic is Burkhan-Baabai (“white sand”), which is a few kilometers from the Nil's Hermitage, at the foot of the Sagaan Khairkhan mountain. According to the legend, it was here that Shargai-Noyon came down to people from the heights of the heavens to help in military work. His horses beat on the ground with their hooves, which is why white sand appeared, which, as they say, is endowed with unprecedented strength. Warriors and soldiers came to this place before the battle to take with them a bag of magical sand. Later Burkhan-Baabay became a cult place not only for pagans, but also for Buddhists - a datsan was erected here and Zhalssan was installed - a pillar to which a barrel of gifts for Buddha was attached. Next to the Buddhist temple is the shaman shrine.

Join our tours and take a look at this amazing attraction:
www.uvisitrussia.com/day-tours/tours-to-ulan-ude/