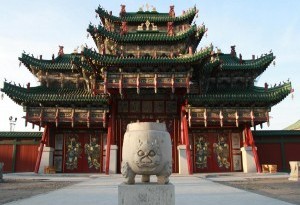 In the southeastern district of Ulan Bator, Bayanzurh, surrounded by modern high-rise buildings, is one of the most famous sights of Mongolia - the Bogd Gegen Palace or the Bogd Khan Palace, the “living Buddha”, the head of the Buddhist community of Mongolia. The structure is a magnificent architectural and cultural monument of the late 19th - early 20th centuries.

The construction of the palace complex was begun in 1893 by order of Bogd Gegen VIII (leader of the Buddhist community of Mongolia) Javzandamba Hutugt, the last head of the country's Buddhist community, and lasted ten years. Many talented architects and engineers have contributed to the creation of a magnificent complex. Thanks to them, the Palace of the Bogd Gegen looks elegant and graceful both outside and inside. At the same time, as the palace grew above the ground, inside it were going to a tremendous collection of works of Mongolian art, which later decorated the palace chambers.

The composition of the Palace complex of the Bogd Gegen includes winter and summer palaces. The Summer Palace is a wooden building in the Chinese style of 1893-1903. Due to the fragility of the material, only the central part of the building, which consists of seven temples, has survived to our days. The winter residence was built a little later, in 1912, and it was designed by architects from the sovereign Russia.

Bogd Khan, whose residence once served as the Bogd Gegen Palace, was famous for his love for unusual and interesting things: he often visited various shops and was especially fond of mechanical structures. Local merchants were well aware of his hobbies and tried to find new entertaining things for Bogd Khan, which he, playing enough, gave the palace servants for storage. Thus, a huge collection grew in the palace, which is currently stored in the palace museum and includes more than 8 thousand exhibits, including paintings on canvas and fabrics, sculptures, musical instruments, religious objects, the thrones of the khan and his wife, various things their belongings, furniture and household items. On the first floor of the museum stands the coach of Bogd Khan, and in the left wing there is a wonderful yurt made of leopard skins.

Entering the Bogda Gegen Palace, visitors enter the hall, where the Khan received commoner pilgrims. Next comes the Reception Hall, which is already intended for meetings with noble guests, lamas and officials. In this hall you can see the chairs received as a gift from the Russian emperor, performing musical compositions to everyone who sat in them. On the wall hangs a portrait of the first Bogd Gegen Zanabazar, painted by the last Bogd Gegen at the age of eight. On the second floor is the bedroom of Bogd Khan.

Join our tours and take a look at this amazing attraction:
www.uvisitrussia.com/tours-to-trans-siber/