Glorious Constantine Palace is the official summer residence of the Russian President, Vladimir Putin. This magnificent old complex is among the UNESCO world heritage sites in Russia. Situated in Strelna, it is a grandiose place comparable to the Peterhof Palace in St. Petersburg. The territory of Strelna, according to the plan of Peter I, had to become the Russian analog of park Versailles near Paris - "The Russian Versaliya". Fabulous Palace and adjacent park were resently opened for the public. Visitors are given unique opportunity to check magnificent halls of the palace, known for its surprising beauty and delicacy. Visit amazing halls and sitting-rooms of the Constantine Palace with the official apartments of the President of Russian Federation and halls for informal meetings. This tour makes a complete idea of the history of the palace and park ensemble in Strelna and its modern function as a “National Congress Palace”. The 11th Russia-European Union Summit and The 32nd G8 Summit took place here. It is an outstanding example of the Russian architecture and a must place to visit on your trip to Russia!

The Constantine Palace, the former summer residence of Russian tsars, is a masterpiece of Russian architecture of the 18th century, which lies on the beautiful south coast of Gulf of Finland, near St. Petersburg.

In 1716, during Peter the Great’s trip abroad, the already famous architect Jean-Baptiste Leblond was introduced to the Russian tsar. In the autumn of the same year the architect arrived in St. Petersburg and started working on the Strelna palace project. The Grand Palace was built almost the entirely during the eighteenth century. In early 1722 the unfinished palace was presented as a gift to Anna Petrovna, the future Empress and daughter of Peter. Only in 1747 did the work resume: Bartolomeo Rastrelli finished all the apartments, built a large staircase, and rebuilt many premises. In 1831 the palace came into the possession of another Grand Duke Constantine Nikolaevich, son of Emperor Nicholas I. It became a summer residence of Grand Duke Constantine Nikolaevich and it was at that time that the palace acquired the name of Constantine.

In 1990, the Palace and park complex were placed under the protection of UNESCO. Only 11 years later by declaration of then president of Russia Vladimir Putin, Konstantin Palace and Park were assigned to the presidential administration. For the 300th anniversary of St. Petersburg Constantine Palace was restored and received a new status – the state complex “The Palace of Congresses.” It is now considered the Presidential Residence in St. Petersburg and has had comparisons made with the White House in America.

Today, it’s a modern complex that consists of a magnificent palace, two amazing parks and a variety of fabulous buildings and structures. All rooms of the palace are equipped with the latest technology.

The renovated Constantine Palace hosted more than fifty heads of state during St. Petersburg tercentenary celebrations in 2003, with Berlusconi, Blair and Bush among them. Restoration of Strelna Palace and Park became a symbol of the revival of a great Russia and its national cultural heritage.

The National Congress Palace and the Constantine palace as part of this complex is today a place where various state events of higher importance are held. The Palace hosts government sessions, international meetings and negations at the highest level, as well as world-famous exhibitions and festivals.

The 11th Russia-European Union Summit took place at the Constantine Palace. It was the first enlarged-format summit of the heads of state and government of all the EU member countries.

It was here during the celebration of the 300th anniversary of St. Petersburg held the most important event at the highest level, which was attended by government and public figures from around the world. In preparation for the celebration of the northern capital, the Russian government has decided to realize the dream of Emperor Peter the Great - to turn the southern coast of the Gulf of Finland in the sumptuous façade sea capital of Russia.

The 32nd G8 summit was held on 15–17 July 2006 in Constantine Palace. This was the first time Russia served as host nation for a G8 summit; and the nation's status as a full member of the G8 was confirmed. The Group of Seven (G7) was an unofficial forum which brought together the heads of the richest industrialized countries: France, Germany, Italy, Japan, the United Kingdom, the United States and Canada. The summit brought together many famous leaders: Romano Prodi, Angela Merkel, Tony Blair, Jacques Chirac, Vladimir Putin, George W. Bush, Junichiro Koizumi, Stephen Harper, Matti Vanhanen and José Manuel Barroso.

Many people are interested in taking this fabulous tour. Generally speaking, this tour is available to celebrities, business and political leaders, major donors, movers and shakers, and people who know someone who works inside the Russian government. That's about as open and transparent we can be about this particular tour.

You’ll have a unique opportunity to journey to Russia’s most majestic landmark – Constantine Palace. Nestled among perfectly-manicured grounds on the outskirts of St Petersburg, it’s a place that’s welcomed countless world leaders and figures of power over the years. Nowadays, it’s a baroque masterpiece with decadent interiors, and this tour will take you to the depths of it. You’ll roam ballrooms and halls encased with marble walls and priceless artworks, and peek inside the private quarters of the Russian President, including the Boudoir of the First Lady and the picture gallery. Once you’ve nosed around the palace’s lavish rooms, you’ll be led down to the wine cellar, which houses around 13,000 bottles. You’ll wrap up the tour with an indulgent tasting session, where a connoisseur will school you in the difference between good wines and great ones.

The themes of 2-hours excursion include the history of establishment and construction of park and palace estate from the epoch of Peter the Great, tells you about the palace’s eminent owners, their life and manners, the modern life of the estate and shows some secrets. Along with permanent and temporary exhibits telling about the palace’s past, there are also exhibited precious pieces from the Hermitage collection – articles which used to belong to the members of the imperial family; the estate also conducts the exhibitions of artworks by modern Russian artists and masters of decorative art.

The excursions are available in Russian, English, German and Spanish daily, except for Wednesdays, from noon to 6 p.m. Please note that the National Congress Palace may be closed for visitors during official events of ceremonies. 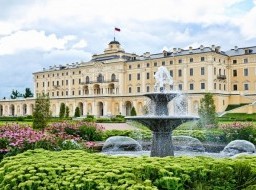 State Complex “The National Congress Palace” was built in 2001 under the declare of the President of Russian Federation Mr Vladimir Putin in the historical venue of the Konstantin palace and park ensemble, the former residence of the Grand Dukes of the house of Romanovs. Read more