Revel in the spiritual heritage of Saint Petersburg while visiting cathedrals of different architectural styles; from Petrine baroque cathedrals in Alexander Nevsky Lavra to the neo- Russian Church on Spilled Blood.

• Be impressed by the Smolny, Kazansky and Nikolaevsky cathedrals

Discover another spiritual edifice, a fortress, commissioned by Peter I of Russia in 1710, at the supposed  site of the Neva Battle in 1240 when Alexander Nevsky, defeated the Swedes. The Alexand Nevsky Lavra was founded also to house the relics of the prince. Today you can see the massive silver sarcophagus of St. Alexander Nevsky in the State Hermitage Museum (without the relics).

Then explore more of the Barouqe masterpieces; the Smolny Cathedral  and the Naval Cathedral of Saint Nicolas and Epiphany,  a marine regimental church. Interestingly it was not closed a day during the times of Bolsheviks.

Your next stop will be at Kazansky Cathedral. It is dedicated to Our Lady of Kazan, probably the most venerated icon in Russia. The cathedral was commissioned in 1801 by Paul 1st. The construction ended 1811 during the reign of his son, Alexandr 1st. When The Patriotic War was  over, the cathedral was perceived primarily as a memorial to the Russian victory against Napoleon. In 1815, keys to seventeen cities and eight fortresses were brought by the victorious Russian army from Europe and placed in the cathedral's sacristy.

And the last, but not the least, cathedral to visit is  the gorgeous Resurrection Church (the Church on Spilled Blood): the second largest mosaic museum in the world with its 7000 m2 of mosaic covering the facade and interior walls. This Church is absolutely marvelous both inside and out. The cathedral, in the pseudo-Russian style, was founded to commemorate the tsar-martyr Alexander II on the exact site where he was mortally wounded in 1881.

It's the type of architecture you dream of before coming to Russia. Don't miss it!

Departure Time:  any time till 4 p.m. 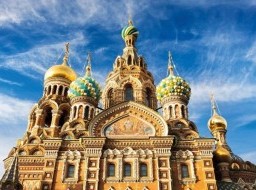 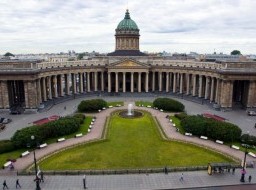 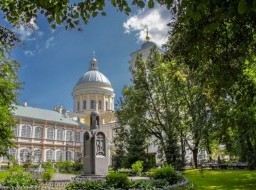 Saint Alexander Nevsky Lavra or Saint Alexander Nevsky Monastery was founded by Peter I of Russia in 1710 at the eastern end of the Nevsky Prospekt in Saint Petersburg supposing that that was the site of the Neva Battle in 1240 when Alexander Nevsky, a prince, defeated the Swedes; however, the battle actually took place about 12 miles (19 km) away from that site. "On April 5, 1713, in St. Petersburg, in the presence of Peter I, the wooden Church ... Read more 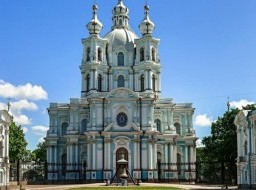 Smolny Cathedral was originally intended to be the central church of a monastery, built to house the daughter of Peter the Great, Elizabeth, after she was disallowed to take the throne and opted instead to become a nun. However, as soon as her Imperial predecessor was overthrown during a coup, carried out by the royal guards, Elizabeth decided to forget the whole idea of a stern monastic life and happily accepted the offer of the Russian throne. Read more 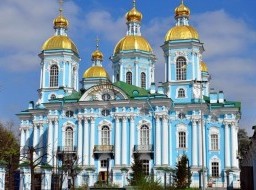 St. Nicholas Naval Cathedral of the Epiphany in St. Petersburg is an outstanding monument of Russian architecture of the middle of the XVIII century, which history is inextricably linked with the history and traditions of the Russian fleet. The cathedral has preserved its historic image and interiors for over 200 years. St. Nicholas Naval Cathedral was built as a "marine regimental church" in 1753-1762 on the sea regimental yard on the site of a ... Read more

Also you get 6% discount and get the best, top-rated and most experienced and knowledgeable hand-picked tour guide appointed on a priority basis.
In our experience, exceptional travel experiences are almost always delivered by exceptional people. With that in mind, we utilize a comprehensive approach to select and employ the best tour guides only. Multilingual and well travelled, each possesses deep insight into the diverse attractions and cultural patterns throughout the region. With us guides undergo a rigorous selection process, achieving outstanding knowledge of local culture and language. Rest assured that the best tour guides only will be working on the tours to give you excellent opportunity to explore the best of the sights during both short and long-term stay in Russia.