Peterhof is perhaps St Petersburg's most famous and spectacular Imperial estate. The Grand Palace, filled with fascinating and elaborate interiors, sits on top of a high seashore ridge overlooking the vast Lower Park. The palace at Peterhof sits amidst an enormous park, adorned with fountains, statues and pavilions, being the world's biggest Fountain's Complex. Enjoy a hydrofoil cruise down the Neva River and explore the royal grounds with your knowledgeable guide, learning about the elaborate 18th-century fountains, sculptures and palaces commissioned by Tsar Peter the Great.

After a pick-up from the hotel by your private guide and driver, take a ride to the hydrofoil pier, located behind the Winter Palace, then board a high-speed hydrofoil for an exciting 45-minute ride down the Neva River, seeing St Petersburg from a unique perspective as you coast along the southern shore of the Gulf of Finland. As long as St.Petersburg was built as seaport, the main and most beautiful buildings are located on the shores of Neva river, with facades to the river, so you will have an excellent opportunity to consider the most beautiful architectural masterpieces of St. Petersburg from the water.

The hydrofoil will take you to Peterhof - St. Petersburg’s amazing imperial estate and a UNESCO World Heritage Site, widely recognised as being the most spectacular imperial palace in St. Petersburg with its beautifully manicured gardens boasting over 140 fountains, being the world's biggest fountain complex.

After 200 years of serving as a grand summer residence of the emperors, Peterhof is inextricably connected with the Russian history. The seaside paradise was built, as a grandiose triumphal memorial glorifying the grandeur of Russia. When your boat docks at the mouth of the Sea Channel, enter Peterhof’s enormous park complex, including elaborate gardens filled with 18th-century fountains, statues, palaces and pavilions built upon the orders of Tsar Peter the Great.  First, stroll through the estate’s Lower Park, which lies between the Grand Palace and the shore and boasts more than 140 fountains, each operated without pumps.

Stop at the impressive Grand Cascade with its golden statue of Samson holding open the jaws of a lion. Once you’ve seen all three cascades, including one with a chessboard design and another featuring Chinese dragons, you’ll understand why Peterhof is referred to as the “Russian Versailles.” Then, continue to the Grand Palace and explore its gorgeous interior, including 30 rooms decorated in an ornate, Baroque design.

From here, stroll through the Upper Garden, a typical French-style formal layout with five fountains, including one depicting Neptune – God of the Sea. Watch out for the whimsical creations designed to soak visitors, such as the umbrella fountain that sheds water whenever someone takes a seat underneath!

After your tour is over, take a hydrofoil ride back to St.Petersburg, admiring the beauty of the surroundings from the water. Your private car will be waiting for you at the hydrofoil pier in St.Petersburg to take you back to the hotel.
Type: Private Tour
Duration: 6 hours
Departure time: 10:00 AM, 01:00 PM

A symbol of St. Petersburg, a UNESCO World Heritage site and an absolute must-see for tourists - Peterhof, also known as "the capital of fountains", is reason enough to go to Russia and admire its unique fountains and palaces. The palace and park at Peterhof (also known as Petrodvorets) are often referred to as "the Russian Versaille", although many visitors conclude that the comparison does a disservice to the grandeur and scope of this majestic... Read more 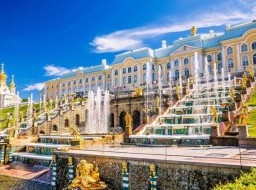 The fountains of Peterhof are one of Russia's most famous tourist attractions, drawing millions of visitors every year. Fountains were intrinsic to Peter the Great's original plans for Peterhof - it was the impossibility of engineering sufficiently powerful jets of water that prompted him to move his attentions from the Strelna site to Peterhof - and subsequent generations competed with their predecessors to add grander and ever more ingenious wa... Read more

Just want to say that my guide Valeria was terrific! Knowledgeable, pleasant and funny. I would recommend her to anyone.

1
25 Jun 2018
Just want to say that my guide Valeria was terrific! Knowledgeable, pleasant and funny. I would recommend her to anyone.
Add to cart