St. Petersburg offers much to see and you can find many of its most prominent sights in the city center. However, two must-see sights are located on the outskirts of the city – Catherine's Palace and Peterhof. This specific tour takes you to Catherine's Palace located at Tsarscoe Selo (the Tsars Village).

The Palace-and-Park ensemble of Pushkin (Tsarskoye Selo) - a former country residence of Russian emperors - is a fascinating monument of the world's architectural and gardening arts of the XVIII-XX centuries, famous for the splendor of its Baroque interiors, including the stunning Gold suite of rooms and the unique Amber Room, the 8th wonder of the world. Its three parks occupy the area of 600 ha, on which over 100 architectural constructions rise: from magnificent palaces and grand monuments to intimate pavilions and park sculptures. Palaces and park ensembles of the town of Pushkin and its historical centre are included in the UNESCO World Heritage List. The compositional center of the Tsarskoselsky ensemble is Catherine's Palace, containing exquisite decorative objects, furniture, Russian and Western-European paintings, unique collections of porcelain, amber, arms, decorative bronze, sculptures etc. Nowadays, the collection of the museum Tsarskoye Selo numbers about 20,000 items. The Tsarskoselsky Lyceum, an elite school established in Russia in the beginning of the XX century for noble families offspring which the great Russian poet A.S.Pushkin attended, is situated next to the palace. The exposition "Recollections in the Alexander's Palace" is open in the last residence of Russian emperors, architectural chef d'oeuvre of the XVIII century (architect G.Guarenghi). In its 12 halls, with authentic or partially reconstructed attire, artworks like paintings, graphics, decorative and applied art, costumes, personal belongings etc. are represented, related to the life of its crowned owners.

Imagine an entire room covered with panels of amber, glowing and catching the light - no wonder the Amber Room at Tsarskoe Selo was considered to be the Eighth Wonder of the World. King Friedrich Wilhelm I of Prussia presented the room as a diplomatic gift to Peter the Great in 1717. After Peter had admired it while a guest in Charlottenburg, Berlin. The room was first installed in the Winter Palace, but in 1755 Empress Elizabeth ordered Francesco Rastrelli to move it to the Catherine Palace

Departure: from your St Petersburg hotel 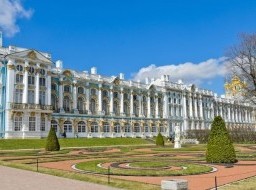 The Palace-and-Park ensemble of Pushkin (Tsarskoye Selo) - a former country residence of Russian emperors - is a fascinating monument of the world's architectural and gardening arts of the XVIII-XX centuries, famous for the splendor of its Baroque interiors, including the stunning Gold suite of rooms and the unique Amber Room, the 8th wonder of the world. Its three parks occupy the area of 600 ha, on which over 100 architectural constructions ris... Read more 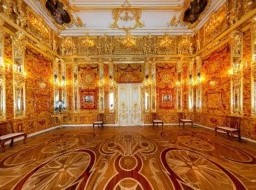 The Amber Room is one of the most famous, mysterious, and majestic rooms of Catherine's Palace in St. Petersburg. Often hailed as "the eighth wonder of the world," it is an opulent room adorned with gold and precious amber. When Peter the Great met Frederick William I in November 1716 to mark the conclusion of an alliance between Russia and Prussia, the King gave the Emperor gifts that included the Amber Study. Peter wrote at the time to Empress ... Read more