The Ulan-Ude Ethnographic Museum is an outdoor museum, located eight kilometers northeast of the city. Visit to this museum is a unique opportunity to get acquainted with culture and history of the city and to discover thousands legends.

The museum has expositions on the history of ethnic groups living in the region: Evenks, Western Buryats, Eastern Buryats, Cossacks, and Old Believers.

Evenks Exhibition: An Evenk camp of several birch-bark and hide tepees: summer tepees of birch bark and winter tepees of fir tree bark. A shaman’s dwelling with two galleries of wood carvings depicting animals, birds and fish having spiritual significance in shamanism. Two wooden storage cabins containing hunting and fishing gear, skis, sledges, sacks, and traps.
Prebaikalian Buryat Exhibition: The exhibition displays eight-sided wooden yurts used by the 19th century Western Buryats (Buryats of Irkutsk region). The interior has seats for honorable guests, the wife’s and the husband’s quarters, and household equipment. There is a Russian-style oven near the yurt. Religious articles are those of Orthodox church as most of the Western Buryats were converted to Christianity.
Transbaikalian Buryat Exhibition: The exhibition includes a winter house and a summer yurt of a rich Eastern Buryat family, two felt yurts and a dugan (small Buddhist temple). The winter cabin, built in 1912, was brought to the museum from the village Arbigil in the Zaigraevo Region. The Tibetan-style temple was transferred from the Gusinoozersk Buddhist Monastery. The majority of Eastern Buryats became followers of Buddhism.
Russian Cossacks Exhibition: This exhibition includes an estate of a wealthy Cossack ataman (chieftain), his main house, stables, storehouses, etc. Here you will also find a house of a poor peasant and a log cabin called an “exile shelter.” In the 18th century Siberia became a place of exile for criminals and political rebels. Along the Trans-Siberian Railway, there were hundreds of such shelters.
Old Believers Exhibition: This exhibition tells about lifestyles of the Old Believers exiled to Siberia after the Church reforms of the seventeenth century. The houses of poor, middle class and wealthy families, a small chapel, and colorfully decorated gates give you an idea of the exciting history of this religious group.
Old Verkhneudinsk Exhibition: The exhibits of this section launch visitors on a voyage through the history of Ulan Ude (Verkhneudinsk) in the 19th - the beginning of the 20th century. Here you will find an early 20th century church, a wooden house with a mezzanine and staircase, and a 1-storey house with ornate carvings.
Wildlife Park: This section of the museum occupies a territory of 35 acres and features native wildlife of Transbaikalie. Here you will see wolves, bears, horses, sheep, deer, camels, yaks. 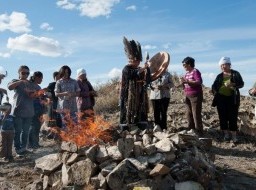 In the amazing vast wilderness around Lake Baikal reside a nomadic people: the Buryats. They live according to their own fabulous customs, and their everyday life is defined by shamanism and a strong sense of family. The Buryats lead their lives in harmony with powerful forces of nature: wide open steppes, majestic hills, dense forests and a vast body of water they call the “Holy Sea”: Lake Baikal. Shamanic rituals and a cult of ances... Read more 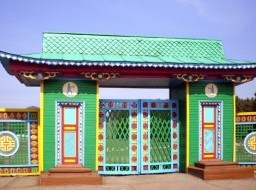 Ethnographic museum of the peoples of Transbaikalia is one of the Russian largest open-air museums (37 hectares). The museum has historical findings from the era of Huns, including a unique collection of wooden architecture of Siberian people (more than 40 architectural monuments).The exhibition of the The Ethnographic museum is divided into several complexes: Evenks, Prebaikalian Buryat, Transbaikalian Buryat, Russian Cossacks, Old Believers, Ol... Read more