A weekend trip to Tatarstan is a perfect way to see a different Russia, learn about Tatar culture and enjoy Tatar food. A premium train with first class carriages runs between Moscow and Kazan which allows you to travel with the maximum level of privacy and comfort.

Kazan is the capital of the Republic of Tatarstan and one of the most beautiful cities in Russia, which markets itself as the Third Capital after Moscow and St Petersburg. In 2005 the city celebrated its millennium. Even though Kazan is only 900km from Moscow it has its own culture, cuisine and language. Tatarstan is predominantly Muslim but you will see a mix of mosques and Orthodox churches here, sometimes within a few metres of each other.

Sviyazhsk was founded by Ivan the Terrible in 1551 as a fortress to serve as the base for the conquest of Kazan - then the capital of the Kazan Khanate. The island was visited by several tsars in addition to Ivan: Paul, Nicholas I and Alexander II. The great Russian poet Aleksandr Pushkin was also a frequent visitor and it is said that Sviyazhsk served as the prototype for the island of Buyan in his fairy tales.

19:40 | Overnight Premium train to Kazan from Moscow’s Kazansky Railway Station. You can board your train 30 minutes before departure.

08:00 | Arrival in Kazan. Transfer to the hotel. A driver will wait for you next to your carriage with a sign saying .

10:00 | City tour of Kazan – on which you will visit the main sights of the city, including:

Kazan Kremlin – the heart of Kazan and its main site. Although a fortress has stood here for centuries the present-day walls mainly date from the time of Ivan the Terrible. The Kazan Kremlin is protected by UNESCO as a World Heritage Site.

Qol-Şärif Mosque – rebuilt in 1996, it is now the main mosque in Tatarstan. The mosque stands on the site where a mosque, said to be reminiscent of St Basil’s Cathedral, was destroyed by the troops of Ivan the Terrible in 1552.

Ulitsa Baumana – the main pedestrian and most beautiful street in Kazan.

Ss Peter and Paul’s Cathedral – one the most unusual and pretty cathedrals, not just in Kazan, but in the whole of Russia. Its beauty was noted by the Russian emperors who visited as well as by Aleksandr Pushkin and Alexandre Dumas. The famous opera singer Fyodor Shalyapin also sang here.

Palace of Agriculturalists – although it was only built relatively recently, this palace is now one of the most spectacular buildings in the city. The main structure of the palace incorporates elements of empire and classical architecture on a grand scale.

Kazan Family Center – one of the more unusual buildings in Kazan built in the form of a kazan cauldron opposite the kremlin. From here you can enjoy stunning views of the historical centre of the city.

Free time in Kazan – you can explore the city by yourself or book one of our optional additional excursions.

Breakfast at your hotel.

Transfer to Sviyazhsk Island. Your guide will wait for you in the lobby of your hotel with a sign saying . During the transfer you will stop on the way at the Temple of All Religions, a unique building comprising symbols of 16 world religions, including Christianity, Islam, Buddhism, Zoroastrianism, Judaism and the ancient Egyptian religion. The man behind this temple is Ildar Khanov who was convinced that if all religions of the world were united, there would be no more wars on earth.

Excursion around the island - the highlights of this tour include:

Trinity Church – the first church to be built on the island; it dates from 1551 when Sviyazhsk itself was being constructed. It is the only wooden church on the island and the oldest surviving church on the Volga. It is believed that Ivan the Terrible himself prayed here several times.

Bogoroditse-Uspensky Monastery – this monastery boasts unique architectural treasures which can be found nowhere else on the Volga. It has two ancient churches which date from the mid-16th century, soon after the construction of the original fortress here. These are St Nicholas' Church with its tall bell tower and the Dormition Cathedral. Inside the cathedral you can see frescoes with date from the time of Ivan the Terrible. They represent one of just two examples of 16th-century fresco painting in Russia and cover almost 1080 square metres.

Joy of All Who Sorrow Cathedral – the largest cathedral on the island; it was built at the end of the 19th century in the Byzantine revival architectural style popular at the time in Russia. The external appearance of the cathedral has remained practically unchanged, resembling a multi-tier tower with flat spherical domes.

Transfer back to Kazan.

Upon your return to Kazan you will have free time in the city.

19:00 | Transfer from your hotel to Kazan Railway Station. The driver will wait for you in the reception of your hotel.

19:45 | Departure on the Tatarstan premium night train to Moscow

Not included in the price
Additional info 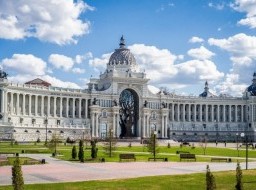 The pompous Agricultural Palace located in the historical center of Kazan has won fame of one of the most controversial architectural constructions of the city. Its construction was completed in 2010. Read more 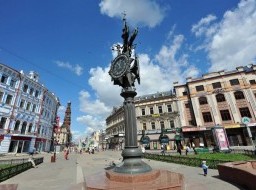 City Center – Bauman Street – the main artery of the city, a beautiful place, the pride of Kazan, where you can fully experience the diversity of the city, to admire the beauty of kazan girls, have a cup of coffee, as well as to update your wardrobe. Your attention can be brought to many monuments of architecture, as well as some surprising sights. Read more 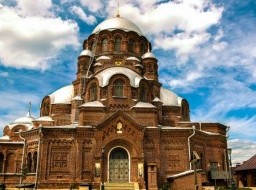 Cathedral of the Icon of the Mother of All Who Sorrow - the largest cathedral on the island; it was built at the end of the 19th century in the Byzantine revival architectural style popular at the time in Russia. The external appearance of the cathedral has remained practically unchanged, resembling a multi-tier tower with flat spherical domes. Read more 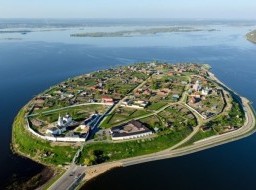 Sviyazhsk is an island city located near the mouth of the river Sviyaga 60 kilometers from Kazan. If you look at the island from above, it resembles a piece of wood or the classic elongated heroic shield (given the history of its creation), which is associated with the "mainland" thin embankment. He came here in the middle of the XVI century as a military fortress and today is a unique monument of Russian antiquity, historical-architectural and a... Read more 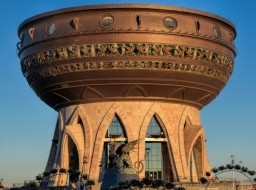 Standing on the bank of the River Kazanka opposite to the Kremlin is a marriage registry office with a big difference as it takes the form of a giant cooking pot known as a kazan. According to legend Kazan gets its name from such a cooking utensil after a servant dropped the golden kazan of a Volga Bulgarian khan into the Kazanka when collecting water. The registry office was opened in July 2013 to replace other registry offices in the city. Read more 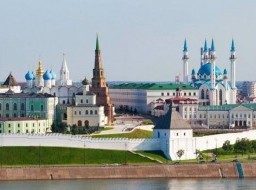 The Kazan Kremlin is the chief historic citadel of Tatarstan, situated in the city of Kazan. It was built at the behest of Ivan the Terrible on the ruins of the former castle of Kazan khans. It was declared a World Heritage Site in 2000. Read more 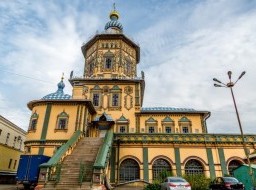 In 1726 a cathedral bearing the name of the Apostles Peter and Paul was built on the spot where one made of wood had been constructed in the middle of the 16th century. People nicknamed the cathedral the Hanging Gardens of Kazan because of the large amount of stone-like plasterwork adorning its walls. This outstanding example of Baroque architecture was made thanks to merchant Ivan Mikhlyayev, whose house (now Kazan's oldest civil building) is lo... Read more 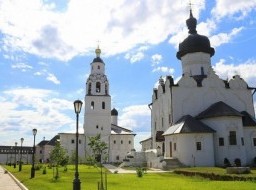 The Cathedral of the Dormition of the Most Holy Theotokos was built by the Pskovian craftsmen under the guidance of Postnik yakovlev and Ivan Schyryay in 1556 -1560. The refectory was attached to it in the 17th century. In the middle of the 18th century the cylindrical drum was replaced with an octahedron, whereas a helmet-shaped dome was replaced with a cupola styled in Ukrainian baroque. In the 19th century the refectory was added with a high p... Read more 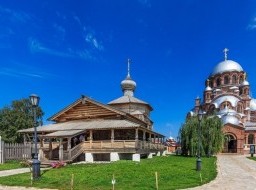 The first Orthodox church in the Middle Volga region, built in 1551. But later the church was rebuilt several times. Located in Sviyazhsk.The temple belongs to the monuments of architecture. A masterpiece of wooden architecture of Russia. He was cut down in one day, without using a single nail. The church is built in tent style. Of great value is a wooden four-tiered iconostasis. Read more 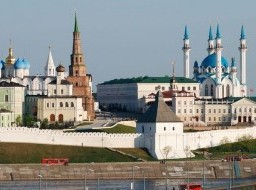 Kazan is the capital of the Republic of Tatarstan, one of the largest and most beautiful cities of Russia, which is on the list of UNESCO World Heritage cities. According to official version accepted nowadays, Kazan was founded no less than 1000 years ago. The atmosphere of this intriguing autonomous republic is redolent of Central Asia. The spires of many mosques dot the skyline - including the grand Kul Sharif Mosque inside the historic kremlin... Read more