Discover Saint-Petersburg taking the tour of the most famous sights of the Northern Capital of Russia. Visit the Peter and Paul Fortress, which is the oldest structure in Saint-Petersburg. The Peter and Paul Cathedral located inside the fortress is served as a burial-place for Russian emperors for almost two centuries. If you don't want to spend too much time on sightseeing or want to make sure you haven't forgotten anything important you will be able to check Aleksandrovsky Park and Mini Saint Petersburg out on the way to Peter-and-Paul fortress. Then, go to an authentic Russian restaurant to devour a 3-course traditional Russian lunch.

In the city's ongoing efforts to enliven their parks and make them pretty, happy, family-friendly places to spend the day, they've added replicas of many of St. Petersburg landmarks including the Peter and Paul Fortress, the Hermitage, the Church on the Spilled Blood and more to the massive park outside of Gorkovskaya metro station and Peter and Paul Fortress. The park already boasts some of the neatest landscaping in the city, lots of shaded areas and well-maintained footpaths, plus the Leningrad zoo and planetarium. Perfect for a romantic stroll or a place to let the little ones run some energy off.

The citadel built to defend the city from sea attacks was never actually used this way. However, Russian Tsars and later Bolsheviks found it handy to keep their political rivals out of the way there.

Today, the Fortress serves as an imperial tomb. The last resting place of every Russian ruler starting from Peter the Great to Alexander III is at the base of its elegant spire. In 1998 the remains of Nicholas II and his family were also moved here to join the remains of their royal ancestors. This area of the Fortress is a somber place of reverence and memory for the many history and world changing events that these rulers initiated.

The tour price already includes all the taxes & fees, you will not see any of them later during the checkout or in Russia.

Adult pricing applies to all travelers

Tour concludes at the restaurant 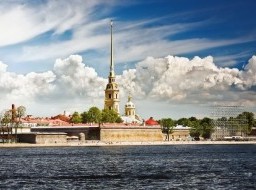 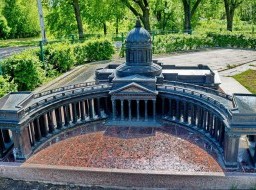 In June 2011, in the Alexander Park, not far from the Peter and Paul Fortress, the Mini-city tourist center was opened, with reduced sculptures of the main sights of St. Petersburg. Read more